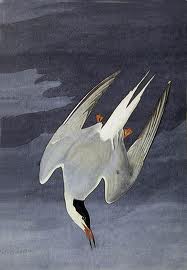 “On the whole page, there was only one picture.  Of a bird.  I couldn’t take my eyes off it.  He was all alone, and he looked like he was falling out of the sky and into this cold green sea.  His wings were back, his tail feathers were back, and his neck was pulled around as if he was trying to turn but couldn’t.  His eye was round and bright and afraid, and his beak was open a little bit, probably because he was trying to suck in some air before he crashed into the water.  The sky around him was dark, like the air was too heavy to fly in.  This bird was falling and there wasn’t a single thing in the world that cared at all.  It was the most terrifying picture I had ever seen.  The most beautiful…He was so alone.  He was so scared” (19).

In Okay for Now by Gary D. Schmidt, Doug Swieteck knows that feeling of terror, and his life feels like it’s plummeting, especially when his father loses his job and the Swietecks move from their small, dilapidated house in Camillo, New York, to The Dump (as Doug calls it) in Marysville, New York.  In Doug’s eyes, the future doesn’t look so great in “stupid Marysville, New York.”  Nevertheless circumstances catch Doug by surprise and take him on a flight that involves some plummeting, but a lot of soaring as well.

At the story’s start, Doug is disrespectful, proud, and stubborn.  His first experiment in living involves mouthing off to his elders and being as mean as possible, landing him in After School Detention multiple times.  All in all, he imitates his eldest brother Lucas, whom he despises, quite well.  However, after he meets Lillian Spicer, a brown-haired twelve-year-old who loves reading and haunts the public library, and Mr. Powell, an elderly librarian, Doug’s life changes forever.  He tries a new experiment in living.  The experiment doesn’t proceed smoothly, and despite relapses to former behavior, Doug’s character changes.  He learns that there is more to people than meets the eye.  His teachers, almost of all of whom shun him at first because of his bad family (his brother Christopher is suspected of theft), turn out to be sympathetic and helpful instructors after Doug gives them a chance.  The same happens with the acquaintances Doug makes in town.  Gradually, the people of Marysville stop seeing Doug as a Swieteck or as Christopher and start seeing him as himself. 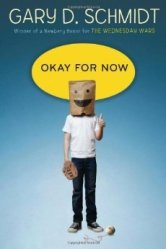 Gary D. Schmidt shows how friendship can make a difference in a wrecked life and messed-up family.  Friends can build each other up, bring out the best in each other, and believe in Possibility, seizing it with their eye and overcoming obstacles to grasp it with their hand.  Okay for Now, in a tale that makes you laugh and cry, tells how a broken boy in a broken family with a broken life becomes whole, no longer plummets, and is no longer terrified, but conquers the skies, faces the storms ahead, and flies.