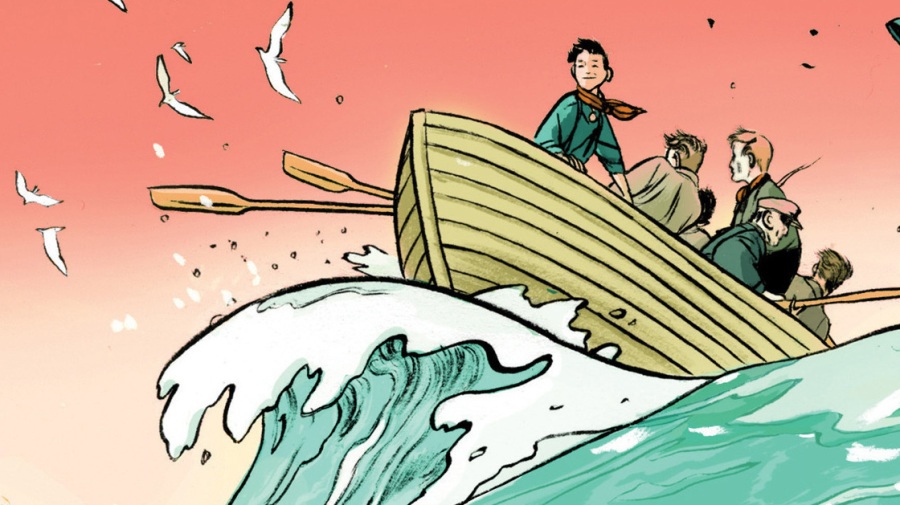 In January 1841, a storm rages off the coast of Shikoku, Japan.  Five fishermen are out in a small boat when the storm strikes, snapping the mast, ripping off the rudder, and washing away the oars. 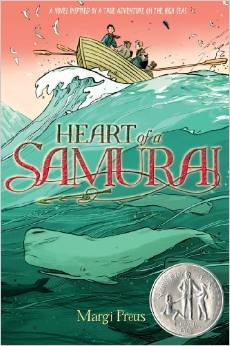 The fishermen drift out of control for eight days until they become stranded when their boat splinters on an island of rock.  Several months later, a ship approaches the island.  To the fishermen’s horror, their rescuers are the blue-eyed barbarians whom Japan has barred from her shores.  Being in the barbarians’ company—leaving Japan at all—means the fishermen may never be able to return home, for Japanese law declares that “any person who leaves the country and later returns will be put to death” (14).  So begins Heart of a Samurai by Margi Preus, a children’s book based on the true story of the Japanese boy Manjiro Nakahama who became known to the English-speaking world as John Mung.

Unlike his friends Denzo, Jusuke, Toraemon, and Goemon who refuse to be “poisoned” by their American rescuers, Manjiro bridges the cultural divide between himself and the whaling crew of the John Howland and learns their customs and language.  The Americans’ inventions fascinate him, particularly the useful things called “pockets,” which Manjiro has never seen before.

Despite being homesick and worrying about his family—for whom he has become the breadwinner after his father’s death—Manjiro is bursting with excitement about the new world he has entered.  Curious, diligent, and smart, Manjiro finds friends and a foster family and forges a path for himself in the world of America.  All the while, though, he dreams of returning to his family and homeland, becoming a samurai, and “leaving footprints in the sands of time” by changing the world (76).  But how can a poor fisherman’s son, now an outcast, ever hope to accomplish these dreams?  Despite the many obstacles that confront him, Manjiro never stops fighting to realize his goals, and as the story progresses, Manjiro matures from an irresponsible boy to an industrious young man.  Overcoming the hindrances and bridging the divides that confront him requires of Manjiro courage and humility.  Gradually he learns that cultural prejudice and pride often mislead, and that both Japanese and Americans have much they can teach each other, if the other side is merely willing to learn.

Drawing on Manjiro’s own writings and filled with pictures he drew, Heart of a Samurai vividly captures Manjiro’s life.  Margi Preus skillfully combines fact and fiction to create a compelling retelling of Manjiro Nakahama’s life that will be an adventure for children to read.