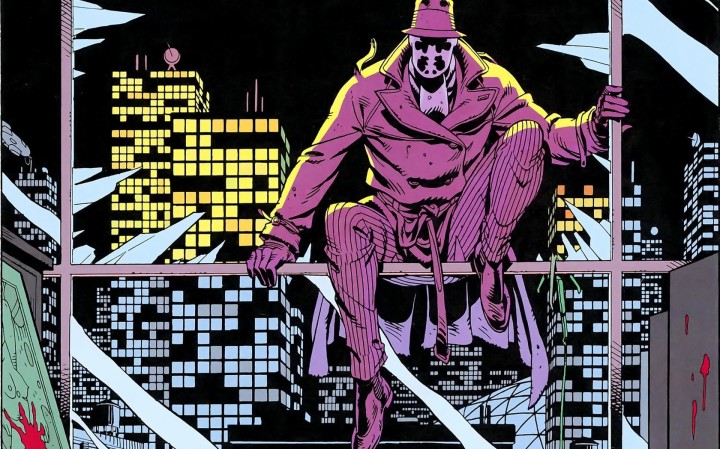 First published in 12 issues from 1986 to 1987, Watchmen has long been recognized as one of the greater (if not greatest) graphic novels of all time. So I finally decided to see what all the fuss was about. Written by Alan Moore and illustrated by Dave Gibbons, Watchmen is a dark and twisted tale of competing moralities.

Set in the Cold War era, Watchmen reimagines what the 20th century might have been like in the presence of superhuman protectors. Emerging in the 1940’s-1960’s, these protectors maintained order and even helped America win the Vietnam War.

Now, those heroes not working for the U.S. government are in hiding, and a government-employed hero named “The Comedian” has been murdered in New York City.

Watchmen traces the story of masked vigilante Rorschach and others as they try to determine who killed the Comedian, and why. Not a conventional murder mystery, this tale intersperses flashbacks that reveal characters’ pasts as well as telling the story of a marooned settler trying to warn a town of an impending pirate attack (a story within a story!). The nonlinearity of the story could easily be confusing, but the plot stays quite clear and there are interesting overlaps and symbolism between parallel storylines.

The characters are also interesting. Armed only with a grappling gun and his own wits, Rorschach exercises a legalistic morality on the world, a morality with no concept of mercy. Dr. Manhattan (the blue guy), the product of an experimental accident that imbues him with near god-like abilities, experiences life as if it is all happening at once, making him wonder if man has any control over what happens, or if the quantum reality is that everything simply is–inevitable.

Without spoiling anything for the curious, I will simply say that one of the main themes of Watchmen, while interesting, is very, very wrong. The ending makes sense in the context of the story, but it is an ending that pits human existence against morality and finally claims that human life is more important than morality. That’s a dichotomy I disagree with.

Note: this story has quite a bit of graphic violence, sex, and cursing, some of which seems excessive but usually makes sense in the context of the plot. Something to be aware of.

This is not a graphic novel I will read more than once, but I am glad I read it. Filled with interesting (albeit disturbing) ideas, characters, and themes, Watchmen gives a unique glimpse into a quite different view of reality–one with no room for mercy or grace. The greatest graphic novel of all time? I think not, but I can understand the appeal.

One thought on “Who Watches the Watchmen?”