It is rather ironic that a book so teaming with life should start off with a simile involving death. Yet so begins Annie Dillard’s collection of essays, Teaching a Stone to Talk: “It had been like dying, that sliding down the mountain pass. It had been like the death of someone, irrational, that sliding down the mountain pass and into the region of dread.” (Dillard 9) Later in this same essay, “Total Eclipse,” Dillard notes “it”—the eclipse of which she writes—causes the mind to want “to know all the world, and all eternity, and God.” Of course, she follows this with the quip: “The mind’s sidekick, however, will settle for two eggs over easy.” (Dillard 24) To some readers, this could be taken as a rather common and perhaps even disappointing ending to a potentially grand metaphysical statement, or some such nonsense.

Like it or not, this occasional flippancy is q 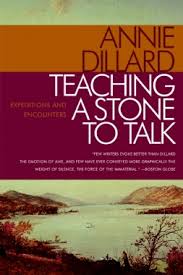 uite typical of Dillard. One moment she will be in the midst of a poetic philosophizing of Jesus’ washing of his disciples’ feet, and the next she will recount that “During communion, the priest handed me a wafer which proved to be stuck to five other wafers.” (Dillard 38) As it so happens, this particular reader, me, does like style of telling, as I see something of myself in it. While I can often see and love the depth and wonder in the world, I tend to focus more on the little amusing things in life. Thus, I appreciate the fact that Dillard occasionally does this well. But all that said, it is the Dillard of her more serious moments that I consider to posses the most fruitful attitude. She has a way of seeing the world that I really ought to remind myself to adopt more frequently.

In a nutshell, I see Dillard as trying constantly to find God in the world. That is the simple explanation. The way in which she does this is more complicated. This is not theological tome, though every once in a while she does come close: upon one occasion she instructs her audience to “Quit your tents. Pray with out ceasing.” (Dillard 94) But usually, she most often seeks God in eclipses, and then in weasels, and later in a dying deer and in solitary walks and lonely farmsteads. Rather than constantly looking for the bad in the world—though there is so much of it—she most often sees the good, sees God, in all the wonder of creation.

Now, I can’t always say I agree with the particular God that Dillard finds (as an orthodox Christian, I would not condone addressing one’s prayers to “world,” as she suggests in the conclusion of one composition). But I suppose that what I really admire is Dillard’s attitude: she has wonder. She possesses a sense of the miraculous and of the odd in all the things she writes about. She recounts all her ruminations through avenues that can seem curiously random, sometimes to a fault (I’m looking at you, An Expedition to the Pole, fond as I was of you). In reality, I have little doubt these essays are meticulously constructed. Most writing is, after all (with the exception of last minute college essays, of course). I particularly admire the fact that she can be so crafted and so particular without the serious stiffness many authors end up cultivating. But again, it is her wonderment at creation that I so admire.

Harsh as this may sound, I have little interest in nature, in the sense that you would not find me studying finches’ beaks on a remote island, as Darwin does in her essay, Life on the Rocks: The Galapagos. I love forests and seeing the leaves change color: I just have little desire to investigate the cells of those leaves, or look closer at the lichen on the trees, as Dillard does. As a result, science isn’t my forte. I don’t care for investigating the intimate details of creation. But from now on, whenever I pick up a great big science textbook with a long-suffering sigh, I ought to accompany it with this light paperback, Teaching a Stone to Talk, so that I can remind myself that God can be seen in all this meticulous creation.

I wonder if the very title of the book (and of an essay inside it) is a veiled reference to Luke 19, the part where Jesus will not shush the children praising him, but instead says that if their voices were silenced, then even the stones would cry out his praises. All nature witnesses, just as we ourselves are called to do. I think Dillard herself does a fair job of it.

One thought on “Witnessing While Wondering”